She is the author of Love Your Jiggle: The Girl’s Guide To Being Marvelous an inspirational book for girls ages 11-17. Topics covered include self-esteem, maintaining friendships, decision-making, conflict management, self-empowerment, and diversity. The messages are positive relating to growing up and being the best and most marvelous girl they can be.

Shanterra is a sought-after speaker on all things related to young people, speaking on topics such as teasing, friendships, cyberbullying, including sexting, and teen relationships. Keynote titles have been Surviving the High School Maze, Ageless Activism, Love Your Jiggle and Lead Fearlessly, Now!

In addition to working directly with young people, Shanterra educates adults on how to be better advocates for young people. This includes training adults in the areas of youth development, youth leadership and understating topics often prominent with adolescents. Friendships, social hierarchies, cyberbullying and teen relationships are a few topics that adults frequently ask her to address. She speaks throughout the country at schools, corporations, colleges and universities, faith-based organizations, non-profits and a variety of associations.

Shanterra’s background in youth leadership and student development is extensive – and impactful. As a first-generation college graduate, Shanterra knows all too well what it means to pursue your passion, which is what she seeks to instill in young people. As a native Texan, Shanterra received a full vocal performance scholarship to Southern Methodist University (SMU). She soon realized that although she loved singing, something was missing from her life and that was the passion and opportunity to serve others. She changed her major, many times, but eventually felt at home with Sociology and later added Public Affairs and Corporate Communications. After earning her two degrees from SMU, Shanterra furthered her education by obtaining a master’s degree in Organizational Leadership from Gonzaga University.

Shanterra’s career has been dedicated to advancing youth development initiatives, consulting for organizations like the DC Children & Youth Investment Trust Corporation and serving as the Deputy Executive Director of a non-profit organization dedicated to ending the culture of violence among young people. She has also served as an Assistant Principal in a private, Catholic high school in Atherton, CA, where she encouraged her students to embrace themselves as unique individuals and to use their voice of privilege to speak for those who are not heard.

As a leadership development expert, some of Shanterra’s proudest accomplishments include: 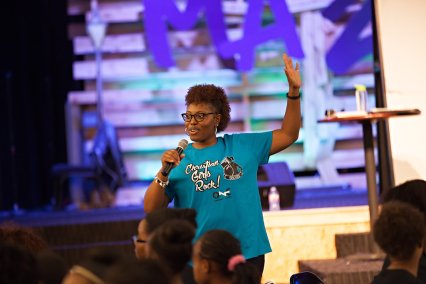 Various media have interviewed Shanterra as an expert on bullying and teen dating violence, including National Public Radio, Essence and Parade magazine, and an assortment of network and cable television affiliates across the United States.

Shanterra has always followed her intuition and following her successful career pursuits in Washington, DC and northern California, Shanterra was inspired to return to her hometown of Dallas, Texas, where she served as a Youth Director at a local United Methodist Church, and partners with schools, speaking to their entire communities on equity and inclusion and relational aggression in schools. Although no longer serving as a youth director, Shanterra serves on the Governance Board at St. Paul UMC, where she also teaches Sunday School and sings with the choir.

Shanterra was awarded the Profiles in Leadership Award from SMU for having made a significant impact on the city of Dallas and on the quality of life for girls and women overall. In addition to the US, Shanterra’s voice has reached others globally. She has traveled to Morocco and Peru, where she spoke to women and girls on being unapologetic in valuing their lives and encouraging them to expect the same from others.  She has also spoken in four cities in South Africa on girls’ empowerment issues including creating safe spaces, combating gender-based violence, and anti-bullying.

Shanterra believes three things have always kept her grounded: her faith, her bond with family and friends, and her relationships with her mentees. These constants remind her of her purpose in life, which is to Mend, Motivate and Empower people, young and young at heart, to believe they are, without reservation, completely MARVELOUS!