(Trigger warning: This blog will discuss rape and sexual assault. This may be sensitive to some readers. If you or someone you know, are in need of resources to help treat or prevent sexual assault, please visit Not Alone ).

For some of you, this may be your first time reading my blog. I won’t do a long intro because you can learn more about me here but, in addition to being a speaker, teacher, writer, and life coach for teens, I also serve as a church youth director. My youth group is middle and mostly high school aged students.  Recently, I had a talk with them about rape. Yes, that’s right.

Unfortunately, this topic doesn’t get much attention in religious circles. However, it is evident that we live in a rape culture, so I wanted to acknowledge this…in church.

Rape should not be a part of anyone’s story. But, unfortunately, it is. Every day. And since we’re all striving to raise marvelous young people, particularly girls and young women, we must begin to equip them with the right information to help themselves or someone else when it comes to rape.

Let’s get to it, shall we. Here are four steps on how to talk to your teens about rape.

Step One:  Initiate the Conversation.

Before I dug too deep into the conversation with the youth group (which is co-ed), I asked them how many discussed sexual assault at home.  Out of about 25 students, one person raised his hand. The others responded with a variety of answers but, the one that hit home was, “I think my parents think it won’t happen to me, so there’s no need to talk about it.”

We avoid certain conversations because we think if we don’t talk about it, it won’t happen.

However, I don’t know one parent of a rape survivor who ever said, I knew this would happen to my daughter.

The idea is terrifying. But, we still must have the dialogue. And even though it’s a serious topic, young people can handle it. In fact, young people talk to each other all of the time about serious issues, whether adults are there to inform the conversation or not. Besides, the dialogue about rape allows us to give the facts, dispel the myths, and create trust in the event a crisis arises.

So don’t wait on her to bring it up. Initiate the conversation.

One interesting, narcissistic quirk about young people is the idea that if it didn’t happen where I live, then I’m not connected to it. Isn’t that strange, especially since the world seems smaller with social media?

We look at stories on the news and think, “at least it didn’t happen here” thereby implying it can’t or it won’t. I don’t think we intentionally want to be disconnected, I think we genuinely feel it’s one less thing we have to worry about it and that gives us comfort.

Unfortunately, because an American is raped every two minutes, it is always happening in our hometowns. In fact, I brought up a local story with the students that brought the discussion closer to home.   The case involved a high school senior who admitted to raping a student on their school campus.

Before getting too deep into the case, I wanted to make it clear that I was not going to talk to them about the perils of skipping class. I also wasn’t going to talk about abstaining from sex (shocker, I know).

I wanted to stay focused on the facts because blaming the victim is a real problem when talking about rape. Furthermore, we often get distracted and focus on the wrong thing when having difficult conversations with teens.

This story had nothing to do with class attendance or chastity and EVERYTHING to do with a rapist admitting to violating another human being. She didn’t consent. In fact, she ran and he chased her down. He forced himself on her. He raped her.

Focus on the main thing. No means no. Period.

Step 3 – TALK to Daughters AND Sons! 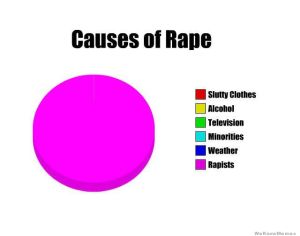 After highlighting statistics on teen dating violence and sexual assault, I asked the group about what they’ve been taught about rape prevention.

I asked the boys, “How many of you have been told or taught on how not to rape?”

The nervous laughter of the group, especially the boys, was expected.  We don’t talk to our boys about how NOT to rape. Instead, we constantly give girls lessons on modesty and other moral lessons, especially from the church.

Even outside of religious settings, the dominant messaging about rape prevention places the responsibility and accountability on the victims, and not on those who perpetrate assaults. That is why I chose to speak on this topic, in the church, to challenge the usual narrative and help the students to apply the principles in a way that was relevant and meaningful to them.

Since we were having this conversation at church, I thought it important to use scripture to provide a spiritual foundation for the conversation. I love how teens are constantly surprised at how much “real life stuff” (their words) is in the Bible.

We looked at Genesis 34 which tells the story of Shechem who was so “in love” with Dinah, that he raped her. Deuteronomy 22 mentions the consequences for the rapist. And 2 Samuel 13, the rape of King David’s daughter, Tamar, who by the way, was dressed in her virgin robe. You can’t get more “right outfit” than that and yet, she was still raped. This is a great example on how not to blame the victim and how to extend the conversation from responsibility on a girl’s attire. At some point, we have to focus on the intention, motive and action of the rapist.

Step 4: Go for honesty, not perfection.

In the spirit of shifting the blame for sexual assault, in recent  news we learned about how a  rapist-who-happens-to-be-a-good-swimmer blamed alcohol for his actions.

The common practice of not holding perpetrators accountable often prevents victims from disclosing their assaults and getting the help they need because they fear they won’t be believed.

Many of the women who have accused Bill Cosby have this fear.

Instead of asking why some survivors don’t report or delay reporting, we should acknowledge all of the ways that our society is complicit in blaming the victim and hindering their ability /willingness to disclose sexual assault. And we should listen to THEIR stories to help us make the necessary changes so that we can have a safer and more supportive society.

If the young person in your life wants to talk to you about these issues, recognize the gift presented to you. And if someone you know says that they were assaulted, BELIEVE THEM.

You Made It
So there you have it. Four steps on how to talk to the young person in your life about rape. It doesn’t have to be perfect. Young people aren’t looking for perfection. They’re looking for honest dialogue. You don’t have to have all the answers. You simply have to start the conversation, focus on what matters, talk to your daughters and sons and go for honesty, not perfection.

Would love to hear from you & get your thoughts. Is this helpful? Have you had “the talk”? Do you think this could help you with the talk? Did your parents talk to you? Share below or shoot me an email

← Spilled Lemonade
Save the date! →