I’m not one to ever brag, but my family is full of great cooks. We all have our favorite dish prepared by another family member and we all agree on who can claim “top chef” status for a particular specialty. For my great-grandmother, “Big Mama”, it was peach cobbler. Ohmygoodness! To this day, I have not had peach cobbler like Big Mama’s! For my grandmother, “Mema”, it’s her sweet potato pies. Her pies are the best on the planet! My mom is known for her German Chocolate Cake, her potato salad, her broccoli rice casserole…wait, that’s more than one thing. Well, what can I say, Mom is a great cook! Most of the time.

One evening, Mom volunteered to make hot water cornbread for Mema after Aunt Kay made her infamous, “can’t-no-one- make-it-better smothered cabbage”. For those of you unfamiliar with hot water cornbread, it is by far one of the best ways to have cornbread. I’m almost certain it isn’t the healthiest way, but that’s not the point. The point is, it tastes delicious!

Well, since Mom was at Mema’s house instead of her own, she didn’t have all the ingredients she needed. She had to improvise and make the cornbread a different way. This made Mom a little nervous and she kept asking Mema about the ingredients that she was going to use as substitutions. I guess she needed some assurance that things would go well.

Mom would throw out suggestions for substitutions but Mema never gave her a direct answer. She would say things like “I don’t know” or “I’m not sure.”  Finally Mema said, “You just have to try it; and that way, you’ll always know.”

It was so simple and so freeing.

You just have to try; and that way, you’ll always know.

I sat at the kitchen table listening to them go back and forth, but slowly drifted to my own thoughts on the things Mom forced me allowed me to try while growing up. Piano lessons, tumbling, singing lessons, Girl Scouts, and even pageants. Some things I liked and some I didn’t, but I tried them. If I hadn’t tried, I wouldn’t have known.

And since I’m still alive and an active participant in this world, there are things I STILL want to try!

I want to try to learn a new language.

I want to try to be a New York Times Bestselling author. I want my books in all public libraries, Barnes & Noble, Busboys and Poets and Justice stores, throughout the country.

I want to try to learn how to swim.

I want to try this recipe I saw on Pinterest before the summer is over.

I want to speak and work at Oprah’s Leadership Academy. Ok, this probably doesn’t fall under the “you just have to try it; and that way you’ll always know” category, but as long as I’m putting things out there, might as well put it all out there!

I want to try to have Marvelous University programs, conferences and camps throughout the country, offering a space where girls and young women have the freedom to fully embrace the truth that they are MARVELOUS!

What is something that you’ve wanted to try?

Let’s be real; the tough part is the “what if it doesn’t work” thoughts, right? But, based on Mema’s suggestion, it isn’t about it working, it’s about trying and then knowing.

What if I try it and I fail miserably?

What if you don’t?

But, what if I try it and folks make fun of me?

But, what if they don’t?

And wait, if they do…are you going to believe their false assessment of you for trying something you wanted to do?

I witness so many young people, especially girls, refuse to try something because they may fail. They feel that failure is the worst thing ever. But, it isn’t. Not trying is.

The message must shift from one of perfectionism (failure not allowed) to “I’m proud of you for trying” (even if you didn’t get the part).

It has to shift from a mindset of asking the teacher, “What’s the answer that will get me an A” to “ask me questions that will make me think critically.”

It’s on us grown folks to create the shift, and to model it for young people.

I know this may require a complete culture change in many of our environments. However, I’m starting to think there are more young people (and not so young people) who are missing out on trying something because of fear of failure or fear of disapproval or fear of…

And you’re probably thinking, how can a principle used for cooking be used in my real life?

How did Mom’s hot water cornbread turn out? Horribly! It didn’t even make it out the skillet! She definitely needed the right ingredients and the substitutions were an epic fail. But, she tried and now she knows. And after that experiment, she made some baked cornbread that was mouthwatering good!

Until next time, just try it; and that way you’ll always know. Have a Marvelous Monday!

What is holding you back?

Is there anything you tried before that maybe you want to try again?

Is there something you can do this week to get you closer to trying? 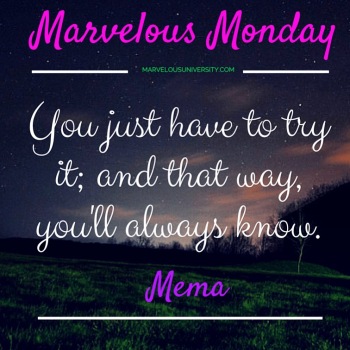 2 comments for “You just have to try it…”